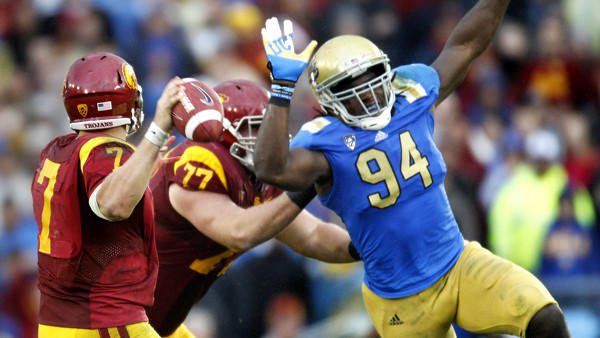 (Oh-wah-MAH-bay Oh-DIGGY-zoo-wah). And you thought announcers had trouble with “Ngata”.

Odighizuwa is considered to be a physical freak, with a strong showing at the combine including a 4.62 40-time. That’s faster than some RBs and WRs. He also was the top performer in the vertical and broad jumps. His 39 inch vertical is two inches more than J.J. Watt posted in his combine in 2011.

Discuss your thoughts on this potential Ravens draft target on our message board.

At UCLA, “Diggy” played 3-4 edge rusher (OLB), but could also play 4-3 defensive end making him a versatile candidate for any team in need of a pass rusher and edge setter. He was second team All-Pac 12 in his senior year, 11.5 tackles for loss, six sacks, and was Bruins team co-captain. He started all 13 games which is important that he did. He missed all of his junior season with two hip surgeries. We know all about that with the Dennis Pitta’s situation here in Baltimore. I’m sure teams will want thorough medical evaluations, but the fact he returned to play a full season uninhibited is a great sign that hopefully the major injuries are behind him.

At the combine, he was a top performer in the cone shuttle drills focusing on agility, quick change in direction. Hips must not be a problem since he glided through those with ease. Lets go to the tape.

Here against Virginia, he shows off that quickness on the inside and blows play up. Doing so, the LB is free to make an easy tackle. He doesn’t let the LT push him aside, and move up into the LB zone which would have made this a positive run for UVA.

Here is example of his brute strength. He keeps his legs churning on the bull rush as hes supposed to. Fights off the LT with one arm, and picks up the deflection leading to a pick six for his team with the other long arm.

After the bull rush to the outside of the tackle, he comes back with a spin move to the inside. Keeps his opposition guessing which way he’ll attack. Getting in the QBs face forced another pick six.

Another sack here against Texas. Quickness in small space. Stops and cuts back inside, reading the QB stepping up into the pocket.

Against Arizone State now, a good example of him shedding a block in order to cut off the edge.

Probably the biggest flaw in the mans game is the way he stands too upright when pass rushing. For a clinic on pass rushing, check out guys like Elvis Dumervil, DeMarcus Ware. Check out the angle of their spines to the field and how low they get as they come around the edge. So low that blockers often have nothing to block. Here, Odighizuwa doesn’t get low at all, and not much of a move to beat the LT. Up high, the blocker has a lot of body to get his hands on to take you out of the play, which is what he did.

– Plays a number of positions up front

– Too upright in pass rushing

– Not much of a swim move

Summary: “Diggy” can do a lot for a team. UCLA runs a similar defense to the Ravens where it’s listed as a 3-4, but is more of a hybrid. Because of that you’ll see Diggy line up as a 3-4 OLB, a 4-3 DE, and sometimes a stand up linebacker, similar to Pernell McPhee’s role in Baltimore which is likely to be vacated.  Some of the fundamentals that he lacks in pass rushing can be taught, but until then, bigger, and better talented men will manhandle his upright pass rush style. Because of this, I think the first round grade is a bit high. Couple that with the medical history, I don’t see a team taking him in the first round.

It gets lost in the mix because as the roster looks today, an edge player is not a need. Terrell Suggs is likely to give you two more solid years, as well as Elvis Dumervil. But Courtney Upshaw is in the final year of his rookie deal. Has he been worthy or retaining? Who replaces Pernell McPhee who is very likely to sign elsewhere as a free agent? If Odighizuwa can be had in round two, he could be a strong addition that would learn and adjust to the pro game in 2015, make a bigger impact in 2016 in the Upshaw role as a run stopper, and maybe the heir to Terrell Suggs in 2017 as an all around force.