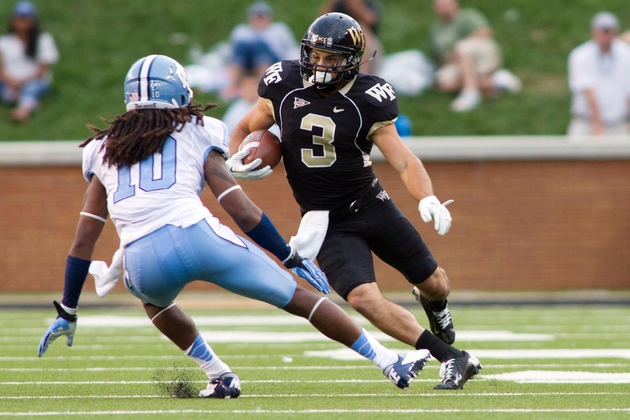 Just when everyone felt the Ravens draft was over, they sneak in a late trade with the Cleveland Browns in the seventh round in order to grab Michael Campanaro, wide receiver out of Wake Forest. The former Demon Deacon does most of his work out of the slot, and draws comparisons to Wes Welker. That’s enough to excite a lot of Ravens fans when they see how efficient QBs like Tom Brady and Peyton Manning have been with Welker at their disposal. But is it a worthy comparison?

Discuss your thoughts on this topic on our message board. Also, click here to find out how you can help BSL grow while supporting four great local charities.

Campanaro was a fifth year senior who leaves Wake Forest as their all-time receptions leader at 229. In 2013 he hauled in 67 passes for 803 yards and six touchdowns. He put up these numbers in just eight games as he missed the remainder of the season with a broken collar bone. But just to show how much the Demon Deacons relied on Campanro, no one else on the team racked up 20 catches for the entire season. Campanaro reeled in 67 balls in four less games than his counterparts.

Here’s a great example of Campanaro (#3) using a head fake to freeze the DB for a split second and allows him to get behind him for a deep TD catch. Great job of hanging onto the ball and “completing the process”

Here is another nice attribute, footwork on the side lines. In the college game one foot counts, but it appears he gets both down here.

Some good, he doesn’t drop many balls, but this rare drop couldn’t have come at a worse time. A two point conversion that would have tied the game in the closing seconds. Instead, UL-Monroe completes the upset.

Bottom line, I’m not in love with the pick. There are some things I like about Campanaro, but more that I don’t. He looks at times like he has to work way too hard. WRs should look natural in their movements. They should look fluid. Like a hockey player on skates, there’s a flow to it. There are just a lot of twitchy, jerky motions in Campanaro’s movement. He catches a lot of balls, but I have yet to see him contested. The spread offense in Wake Forest helped him get open often. He didn’t have to do much on his own to get open, he didn’t have to win a one on one battle with bigger DBs, and he didn’t take a hit going over the middle. What’s going to happen when he gets jammed off the line, or when a LB hits him with a full head of steam? As sure handed as he is, he dropped a catchable ball with the game on the line. Does he buckle under pressure? Too many question marks surrounding whether or not his game will translate to the NFL level.

With the addition of Campanaro, the WR depth chart looks like this:

Where does Campanaro fit? The Ravens likely will carry six WRs on the 53-man roster, which means two of Thompson, Williams, and Campanaro will not make the team. I would have a hard time seeing Brown or Mellette not making the team. The Smith duo and Jacoby Jones are locks.

I get the feeling that trading away a sixth round pick from next year’s draft in order to grab Campanaro might not have been the best idea, only if they find themselves in a situation where they need to trade up. When compensatory picks are awarded, they should get a decent return once again to make up for it.