Would be such a Raiders move. 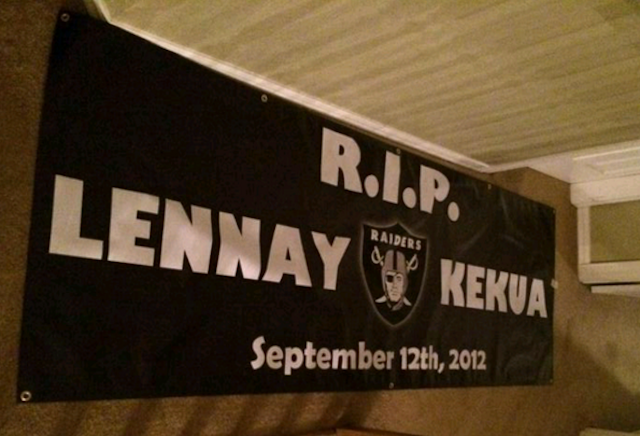 I have to say I am beyond impressed with Terrelle Pryor. Maybe my expectations were just so low on the guy and maybe that's why but he makes a lot of big time throws. If he keeps playing like this I wouldn't blame them if they don't draft a QB in the early rounds next year and move forward with Pryor.

Sports on Earth: GM for a day
http://www.sportsone...-raiders-roster

The San Francisco Chronicle reports that the team wants NFL commissioner Roger Goodell to handle arbitrating the lawsuit filed by the Raiderette cheerleaders.

Raiderettes attorney Leslie Levy says league arbitration presents a conflict of interest because the commissioner is paid by the Raiders and other NFL teams.

Schaub obviously has his limitations  but he's shown he can be a legitimate NFL starter at times as well. The potential for stable performance at a late round pick cost seems worth it to me.

There was also talk of him being moved to Cleveland... I'd happier with him in Oakland. Wouldn't have been 'afraid' of him with the Browns... but he could have been enough to make Cleveland close to a playoff team.

CBS Sports: Richie Incognito is '100 percent into' playing for the Raiders

This just makes too much sense.

CBS Sports: Richie Incognito is '100 percent into' playing for the Raiders

This just makes too much sense.

Probably takes away some of the sting from the Richard Seymour/Carson Palmer trades, knowing they would have just whiffed on those picks anyway.

Sports on Earth: The Expendables
http://www.sportsone...lil-mack#!7eZI7

Maybe this thread will be renamed?

They were talking about it on NFL Radio this morning. Sounds like this could very well happen. Oakland is not giving them a new stadium. An Oakland councilman all but said they should consider SA if they're going to put up $600 million.


I never had friends later on like the ones I had when I was twelve. Jesus, does anyone?
Back to NFL