$450 later we think but aren't sure that our <2 year old lab has torn his (dog version of an) ACL. He's zonked out on sedatives and pain killers now, need to try to get him to a veterinary surgeon in the next couple daysfor further diagnosis. The emergency vet couldn't feel his femur shift freely from the upper bone when she inspected him, which apparently is the telltale sign, so maybe we will get lucky and it's just a muscle strain or something.

Got good news here.  Surgical consult with the veterinary orthopedist revealed that all his knees and hips and everything are in good shape and no torn ligaments.  The doc thought he just had a soft tissue injury like a pull or strain.  She recommended up to 4 weeks of light activity, though we've already had trouble preventing him from running and playing even on-leash or in the house over the first 4 days since his original injury.  He mostly seems fine, though, so we'll just take it easy with him, avoid dog parks and runs for as long as we can stand to absorb all of his energy without any real outlets.

Now off to look into pet insurance so when this happens again it's only an emotional fear and not a financial one...

Melatonin and Benadryl will knock him out. I gave mine steady doses of both during his rest period.

Our cat is a few weeks away from turning 16. Has always been a healthy cat. He looked lethargic and uncomfortable so I took him to the vet the Friday before last. They took a look at him, drained his anal glands, gave him an antibiotic and said he'd probably feel better. He did. Until an hour before we left for Vancouver at 2 AM last Thursday morning. Limping really bad, crying out, hissing when we touched him. I literally almost didn't go on the trip I didn't know what to do. The cat is an a-hole, but he's our a-hole so he doesn't like anyone but us and I wouldn't ask anyone else to have to try to put him in a carrier, which he loathes. So we put him in the carrier for a few hours and left, had my father-in-law take him to the vet for another check-up. They did a full scan and found a bunch of issues an old cat would have. Beginning signs of kidney failure, congestion in lungs from what could be bronchitis, pneumonia, even cancer. Some kind of degenerative spine issue. So basically the entire first 24 hours of this trip we were hoping the cat wouldn't die or need to be put down while we were gone. We had our neighbor check on him, give him kidney food the vet gave us, had my mom come up to give him pain meds and spend the night...it was crazy. They all said he appeared to be OK, but looked off. So I stop at home on the way to work from the airport (took the red eye last night) and within 5 mins he's chilling like nothing happened and wants to be let outside. LOL. This darn cat. I know he wont live forever but this was a sobering preview of what is coming our way in the near future. I just want to keep him comfortable for as long as I can. Who knows how long that'll be but it was nice coming home to find him acting like he was totally fine.

Check it out. A dishwasher that worked for a restaurant in Little Italy making minimum wage plus tips donated $6000 to Catherine Pugh mayoral campaign.

Check it out. A dishwasher that worked for a restaurant in Little Italy making minimum wage plus tips donated $6000 to Catherine Pugh mayoral campaign.

Sucks that this is a common practice among all politicians. Take all the money out of politics.  You don't need to campaign. Make a video stating your case. Post it on the internet. Do a few town halls and debates which you can pay your own way to get to. This crap where they need like 40 handlers to tell them what color socks to wear in public is ridiculous.

Couple weeks ago John Oliver took his shot at Pugh. Hilarious, as usual.

Jokes aside, it really is a shame the disservice city officials do for their residents. Saw that the Transportation Director, hired by Pugh, recently resigned. An investigation showed that she flat out didn't request money from the state to fund road repairs for the city. Every county writes a letter in October to the Governor stating what they would like to repair, and the funding it would take. Hogan prioritizes the needs and allocates the money appropriately. Baltimore City not sending a letter is the same thing as saying "Our roads are fine. Money? No thank you." And thats just the tip of the iceberg.

“Short of Catherine Pugh’s resignation, this is the best thing that could happen for Baltimore right now,” [Councilman] Dorsey said Friday. “She is an embarrassingly incompetent DOT director.”

Bikemore, the bicycle advocacy organization that has been pushing for a better biking system in the city, said in a statement that Pugh’s and Pourciau’s actions were “at odds with the ethos of progressive transportation both claimed to embody.”
Bikemore called leadership turmoil in the transportation department troubling.
“This lack of leadership has cost the city millions in lost grant dollars, resulted in poorly managed projects, led to the attrition of talented staff, and has [sown] deep distrust in communities,” the organization said. “When communities don’t trust DOT to do its job, it blocks all progress toward building a city connected with high quality transportation choices.”

Deep distrust in communities. Not my words.

Pugh should have fired that person straight away for such a damming error. But she's too busy playing Healthy Holly sales rep to worry about, you know, a city she runs. They cited that it was during a period of transition. Pourciau was hired in June. The letter is due in October. Transition? Give me a break. So the previous DOT leader wasn't working on it either? It was even reported in The Sun in October. She kept her job and just this past week resigned amid investigations into other parts of her leadership.

People in power taking advantage of working class they are supposed to represent. Been happening since the beginning of time. Free money. Perks. Pretend to do things and really do nothing. City is doing a horrible disservice to its residents, in probably a lot more areas than have been reported.

These guys need to interview everyone in City Hall and make it all public. It'd be a hoot.

If its because of the rain, use the app.  DTV now or whatever.  The app is shit but it works.


Canceled DTV. Have a PSVue account on a fire stick. Best decision I ever made. There is literally nothing I could watch on DTV that I can’t watch streaming. And I save a ton of dough.

Never thought I’d be a hipster but here I am.

Roof leak, very likely from when we had solar panels installed two years ago.

To pay or not to pay. Pay the ransom so that the business of the city gets back to work. Home sales are on hold.

How the hell does the city not have insurance to cover this sort of thing. Businesses an order of magnitude smaller have cyber insurance. You should have simple security practices in place to avoid this, but if you get bit, the insurance pays the ransom and you get back to business.

I expect the elected officials to be stupid, but the employees should be better than this.

Were also the epicenter of cyber security...which makes it that much more annoying.

Ugh that's horrible. Hoping for the best for them.

Horrendous.  Hope they get the best care possible and down the road this all ends up as a terrible memory for the parents and inspiring story for the kid.

Horrendous.  Hope they get the best care possible and down the road this all ends up as a terrible memory for the parents and inspiring story for the kid.


Yea that’s the hope. She is only like 4.5 months old. She is at Hopkins, which is the best for this.

As long as she survives, she will never remember this happened, so that’s the one thing to try and keep in mind.

That truly, truly sucks. The only saving grace here is that, like you said, the kid is in the best possible hands.

Hey snowflake. Casmir Pulaski, was a polish that came to the United States and fought in the American Revolutionary War. Also known as the "father of the American cavalry". What are they not teaching in schools... btw, they spray painted over the words 'Revolutionary war hero". 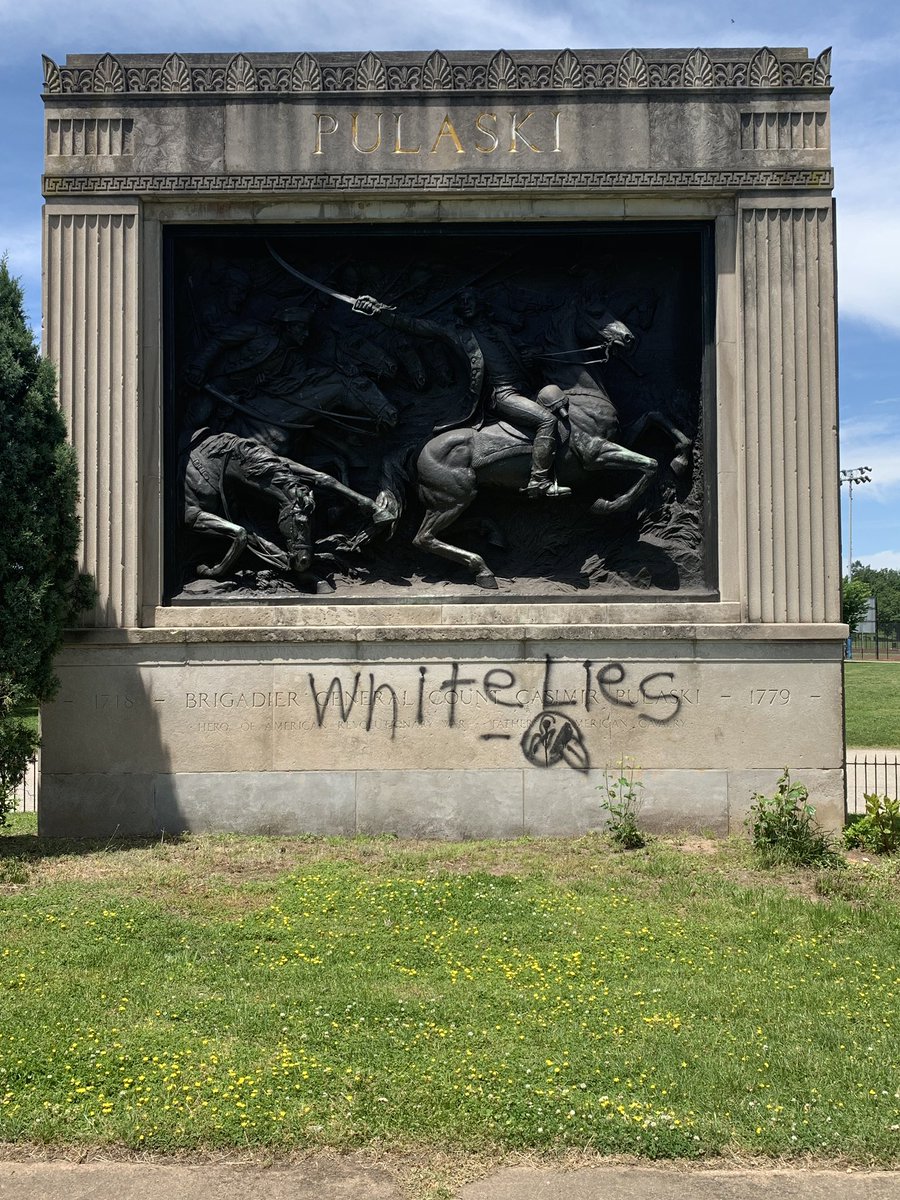 Obviously that’s unacceptable, but when you start off with snowflake, it pollutes your point.


1 user(s) are reading this topic