Does Ed Reed have anything left to give? 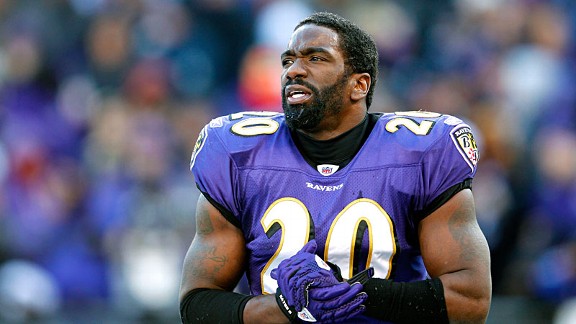 Ed Reed made his return to Baltimore on Sunday, playing in Lardarius Webb’s charity softball game at M&T Bank Stadium in front of about 15,000 fans. The game is growing in popularity each year, and has outgrown the capacity of Ripken Stadium, home of the Aberdeen Ironbirds.

With Reed facing the Baltimore media for the first time in long time, and currently unemployed, there is only one obvious question for the man. Are you going to play this year?

Discuss your thoughts on this topic on our message board.  Also, click here to learn how you can help support BSL and four great local charities.

“I know I can still play,” Reed says.

That is debatable. We have seen holes in Reed’s game toward the end of his tenure as a Raven. He was benched and ultimately released by the Houston Texans in 2013. Yes, the team with the worst record, that needed all the help they could get, did not require Ed Reed’s services. Reed would reunite with old friend Rex Ryan to play the final seven games of the season. The lowlight of his tenure in New York was actually his second trip back to Baltimore last season when Joe Flacco and Jacoby Jones hooked up for a 66 yard TD pass that made Reed look as foolish as we have ever seen. However, the hands are still there as he picked off three passes with the Jets.

Clearly he’s not the same player he once was. Ed Reed will be 36 years old this September.

In each of the last three years, Ed Reed has allowed a higher percentage of catches per target than the year before. It’s obvious that he is losing a step as receivers are having more and more success, and quarterbacks won’t be afraid to throw his way anymore.

I’m not one who believes that players ruin legacies by playing with other teams in a last ditch effort. If you love the game, you’ll play for whoever will employ you. I don’t think people think lesser of Michael Jordan’s career despite finishing it with the Wizards, or John Unitas with the Chargers, or Ed Reed with his one last go at it with Houston and New York. It certainly shouldn’t take away from the man’s career as a whole, and Ed Reed’s is as decorated as any of the game’s all-time greats. But if he doesn’t hang it up, and plays with his fourth team, third in two seasons, Reed will be aligned in the “hanging on way too long” category.

One thing to keep in mind with Ed Reed, take his statements with a grain of salt. He’s been known to hint at retirement at times, and in the next breath claim he has five years left in the tank. Of course Ed Reed is going to keep himself available for any team in need of a safety that is willing to roll the dice on him. Why wouldn’t he allow teams the opportunity to pay him more money?

On the flip side, if a team doesn’t pick him up, he’ll have to just accept the fact that it’s over. Despite some comments about “disappearing” from the game like “Barry Sanders” (completely different situation), it should be a given that Ed Reed will sign his one day contract with Baltimore, and retire a Raven. Not if, but when?

The Ravens have a rookie in Terrance Brooks slated to play free safety. They signed Darian Stewart who has been underwhelming in his short career.

There is one final question to ask. Would you sign Ed Reed? Just for old time sake? I would have to say…with all due respect, no. Even if it’s with good intentions, how bad would it look if his beloved Ravens cut him mid-season?